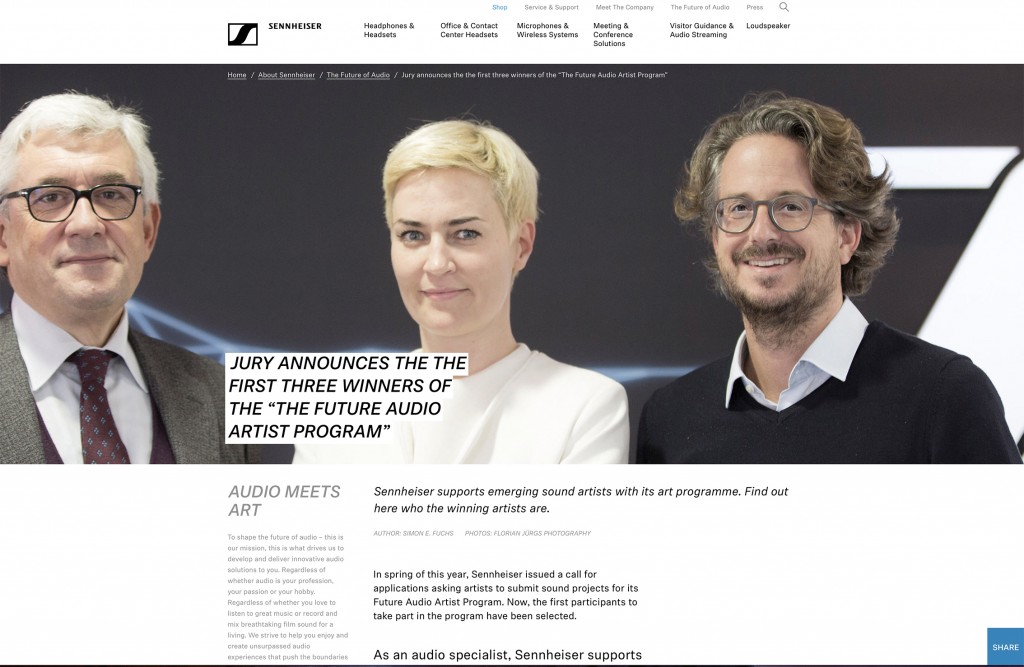 I feel very honoured and very happy to announce that I have won the Sennheisers „Future Audio Artist Program“ prize.

I feel very honoured and very happy to announce that I have won the Sennheisers „Future Audio Artist Program“ prize.
Thank you Sennheiser and Jenny Falckenberg Unique Art Concepts!

you are cordially invited to the opening of my solo show  What Do You Want To Forget? next Wednesday, 25th of January, at 7 pm, in the Croatian Association of Artists.

I am happy to anounce the beginning of kickstarter campaign for my „What Do You Want To Forget?“ project, starting in Novmeber 2016

WHAT DO YOU WANT TO FORGET?

Art project in the framework of the International Holocaust Remembrance Day 2017 by Jovana Popić for Croatian Association of Artists in Zagreb, Croatia.

The idea that remembrance and forgetting, both part of memory, are crucial to the construction of human identity and that they are fundaments of human freedom and future, is the main underlying idea of this artwork with the title: What do you want to forget? Characteristics central to the memory processes such as the fragmented, the selective and the constructive, the oscillation between fact and fiction– are substantial and conceptual foundations of this artwork.

This acoustic space installation has a different approach to the theme of memory from the dominant approaches present in social and political discussions. Using the media of sound and object, it employs art as a technique of memory in its exploration of the gaps- “intermediate spaces” between remembrance and forgetting, at the level of individual and collective and through time dimensions of past and future. Furthermore, What do you want to forget? associatively integrates the observer into the dialogue and serves as a trigger for his or her reflections about his or her own memories and its contents that he or she would like to forget, all together as a part of aesthetical experience. This work is based on the Foucault’s idea (1971) that every archive (e.g. document, remembrance) is a general system of the formation and transformation of statements in which categories of identity and subjectivity play a major role. Therefore, the goal of this work is not to build the bridges to the past, but to provide a space for the production of individual and collective memories constituted relative to the canonized worldviews of the past and governing social and individual contexts.

Forgetting, Aleida Assman (2006: 105) writes, makes remembering possible and it is part of a strong social and political strategy in the formation of individual and collective memory. What do you want to forget? – ambiguous question taken for the title of this artwork, is the point of departure in the empirical basis of the work which will include collection of audio records of human testimonies. Answers to this question provide the main material for its audio dimension. These answers create a space in which remembrance and forgetting, both as dimensions of memory, construct a complex and volatile landscape of each individual experience. The intention of this work is to map this space and draw its roads and boundaries, occurring in the processes of memory creation. These maps will then serve as signposts, helping the observer to navigate through these individual testimonies and reflect on the interpretations of history, while simultaneously exploring the roads and boundaries in their own memory and interpretations of the past, through an artwork.

Human body is the most direct carrier of identity. It often has dual meanings: it is both associated with endurance and resistance, individual and the collective, functionality and disfunctionality, as well as with strength and fragility, life and death. Vision of the body as an object with these dual characteristics, and as a locus for the archive of complex emotional-cognitive contents, are a point of departure for the spatial dimension of this work. In that body remembrance and forgetting are stored in one of its most vital and symbolical parts – in the center of its spine. The installation represents this body through five enlarged interpretations of human spinal cords. The singular, individual and subjective body meets the collective “body” of the community on the intersection of the visual and acoustical dimension of the work: invisible loudspeakers, transmitting the audio archive of subjective, personal testimonies based on memory, are stored in the centers of the chords. The bone marrow broadcasts noises, indiscernible acoustic events, as if they were coded messages from some unknown realm. But between them a pure human voice is heard, speaking about its recollections, about forgetting and oblivion, about its experience of being human. The gigantic size of the chords, indicating the size of the whole invisible body itself, is pointing at the importance of the memory stored in it as one of the most important bearers of human identity.

Simultaneously, the audio-visual form of this work also represents a gigantic humanlike cyborg– automaton, an artistic paradigm of a human being of the near future. This automaton has a dual, unclear relationship to its memory, oscillating between remembrance, forgetting and amnesia, and has only a partial capability of recalling the ancient archive stored in his body. Beside its acoustical denotation, the artistic visualization of this state are his five giant futuristic spinal cords. They are his visible, only “conscious “ parts, capable of remembrance and forgetting, while the invisible rest of his body hibernates, buried in the unconscious territory of amnesia. On the collective level, unsolved conflicts in the society, which oscillates between memory and amnesia, give birth to those giants, who hibernate under the indifferent surface of a future-land, getting ready to be excavated or to be forgotten from that same world which once created them.

The purpose of archiving, according to Foucault, is the transformation and production of difference. If we find ourselves in the area of tension created by the elements of this installation, between remembrance and forgetting, past and future, agony and apathy, this elements will transform not only our conceptions of them, but our experience of time, presence, reality, identity, body, memory, past, future and subjectivity. We are becoming a conscious, living part of the archive, participants who produce authentic, singular memories. We are creating a space in which individual, subjective image collides with the image of history. Installation What do you want to forget? invites the individual members of the society to be the main initiators in building bridges over its own boundaries. It has an open, unfinished end, and as such it has a potential of a mediator in urgent political and social questions.

In the collection of materials for the audio archive of human testimonies, the focus will be on the victims or descendants of the victims of the Holocaust, all of whom lived in three main cities of the former Jugoslav Republics: Zagreb, Belgrade and Sarajevo. Timothy Snyder, history professor specializing in history of Central and Eastern Europe, argues (2015: 226-228) that until now historical research of Holocaust paid little attention to the fact that biggest number of Jews died not in Germany, but in the puppet states that arose from the wreckage of other states. They most closely resembled the zone of lawlessness where the Holocaust took place. One of the puppet states that Germany created in Yugoslavia was Croatia, at that time ruled by the nationalists. The largest killing facility in wartime Croatia was the Jasenovac concentration camp complex, 60 km south of Zagreb. The victim groups included Jews, Serbs and Roma, and while Serbs were by far the largest victims groups, in proportion to their population, Jews and Roma suffered far more. As a consequence, three quarters of Jews, about 32.000, were murdered in wartime Croatia. After Germany invaded Yugoslavia in April 1941, Serbia became a district under German military occupation. Although a puppet government was appointed, it lacked every aspect of sovereignty. As in the occupied Soviet Union, and on a similar timetable, German occupation forces opted for terror against civilians as the central method of control. Reprisals of any act of resistance were taken against Jews (and sometimes against the Roma and the Communists), with a standard ratio of 100 locals killed for every German. By this method, the vast majority of Serbia’s Jews, about 8 000, we’re dead by the end of 1941 (ibid. p.227).

As some other European postwar countries, post Yugoslav countries still remain unsure of their past. Their national identity today is constituted upon multilayered social abstractions – via recent and ancient historical narratives. They are often opposed, especially regarding the historical narratives about the last two warfares on their territories, the Second World War and the Civil War in the 90ties. There are issues, which these societies are still not able to discuss trough social or political dialogue. Therefore also the history of the Holocaust became distant, contemporary analysis of the circumstances which created the concentration camps on their territories is lacking, as well as the official declarations of their existence and the explanation of their purpose to the boarder population. Those societies are still not able to create situations in which the processes of remembering and forgetting, both from the perspective of the victims and those who committed these crimes, could be induced.

Writing about the Holocaust in today’s context, Snyder argues (2015: xiii) that the early twenty first century is coming to resemble to the early twentieth, as growing preoccupations with food and water accompany ideological challenges to global order. In Europe, democratic elections give way to nationalistic radicalization of the society. Therefore he concludes that “history of the Holocaust must be contemporary, permitting us to experience what remains from the epoch. The precise combination of ideology and circumstances in the year 1941 will not appear again, but something like it might. Part of the effort to understand the past is thus the effort needed to understand ourselves. The Holocaust is not only history, but warning” (ibid. p. xiii).

In the socio-political dimension, this project employs art as a medium for addressing the issues within a society, which cannot be addressed through political or social dialogue. It developed out of necessity to fulfill the urgent need of the post Yugoslav societies for contemporary production of memories related to the atrocities of Holocaust at its territories. Providing the place in which history meets individual recollections, it produces memories relative to the social and political discourses of those societies today. The trigger for those memories, the question: What do you want to forget? indicates the contents of the memory which are rather to be forgotten not only within an individual, but also within a social and political framework. Leaving the society unaware of those contents by leaving this question unanswered and undocumented, might fuel the catastrophic prospects of the future.

A unique, artistic archive of human testimonies will be the result of artist’s research on the territories of former Yugoslavia, which will be collected throughout 2016. This archive will be the integral part of the of multimedia spatial installation placed in the gallery of Croatian Association of Artists (HDLU) in Zagreb in January 2017. The final selection for the audio archive, the essential part of the spatial installation, will comprise a smaller number of testimonies, chosen by the principle of the most remarkable and most compatible into the final soundscape of the work. One part of the installation will also be a highly visible banner on the façade of the HDLU Building in Zagreb, situated on the square in the cities center, with the question: What do you want to forget? The goal is to induce the same process of spontaneous recollection, analysis of memory and its contents in the random by-passer, who will never visit the gallery. Furthermore, a complete and elaborate publication in form of a book with all the collected testimonies, and also comprising documentation of the complete audio-spatial installation is planned to be published, serving as an open source database.

Michael Foucault (1971), The Archelogy of Knowledge and the Dicourse on Language, New York: Vintage books, 2010

The global award in photography and sustainability